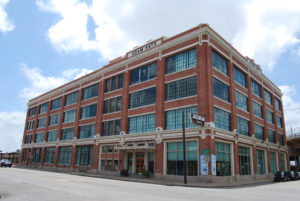 Groves Electrical Service was chosen for the immense remodel of this Dallas land mark and truly historical building . This 4-story, red brick building was built by Henry Ford as a production plant for Model T’s (Graham was Ford’s corporate architect in 1913). In 1925, Ford moved to a new plant, though they continued to use the building as a warehouse and showroom. In 1955, Adam Hats, a subsidiary of Miller Brothers Hat Co., Inc., bought the building. In 1986, Adam Hats vacated the building, leaving it empty. Westdale Asset Management Co., who also rehabilitated the 2220 Canton Lofts, bought the building in 1997 and hired Corgan &Associates to renovate the site into 90 loft apartments. Groves Electrical Service was able to accomplish the monumental task of upgrading the 1913 building up to current building standards.

Back to Our Work